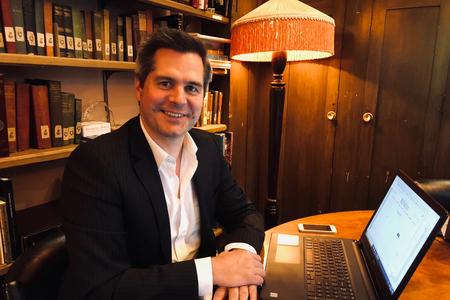 Rob Hahn is a St. Paul, Minnesota-based small business owner and entrepreneur. His most recent project is a documentary film entitled “Hi, Gene! Meet The Real Senator McCarthy,” which chronicles the unlikely and historic 1968 presidential campaign of former Minnesota U.S. Sen. Eugene McCarthy. The film has aired on PBS stations throughout the country. It can be streamed free at www.higenemccarthy.com and is available on Amazon Prime (https://goo.gl/kt2WDW). The film was nominated for a regional Emmy© in 2017.

As a journalist, producer and filmmaker, Hahn has conducted thousands of interviews, including some with individuals such as former Gov. Jesse Ventura, Sir Richard Branson, Sam Donaldson, Gov. Jerry Brown and Jeff Gordon. He has also appeared in numerous television, radio and print interviews to share his views on and insights into multiple topics.

Born and raised in Winona, Minnesota, Hahn lives in St. Paul with his two sons and is a graduate of the University of Notre Dame.